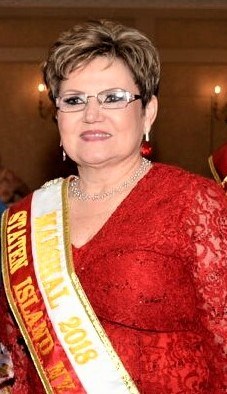 Representing Staten Island and Polonia is Jolanta Opach Marshal 2018. She is proud  of this opportunity to display her Polish heritage and pride. This year the Polish People celebrate 100 years of Poland’s Independence and also 100 years‘of the existence of the Polish Scouts.

This year was Jolanta's 25th year marching with Polonia, in the annual Pulaski Day Parade in Manhattan.  It has always been a wonderful experience and she is extremely thrilled to be a part of this year’s celebration..

Jolanta was born in the beautiful historical city called Dukla, Poland.   She began her teaching career in Wroclaw, Poland where she met her husband Tadeusz. They then moved to Swidnica where she gave birth to her daughter Gaudencja. Not long after the family came to the United States for numerous reasons; particularly in pursuit of continuing my education.  She studied bookkeeping and became an office assistance in the Midtown School of Business, New York .

She worked as a Polish school teacher and scout master in Ozone Park,Queens. She proudly contributes her life to the Polish- American culture in Staten Island and New York City. She worked for 20 years at the Polish and Slavic Center, where she became an immigration counselor, a citizenship coordinator, an administrative assistant and teacher for the Colony for New Immigrant Children Program.

She was awarded, by the Polish Minister of Education, “The Commission of National Education Medal” for all her contributions to the Polish education abroad. She also became an active volunteer with a group of teachers from the “Polish Supplementary School Council of America“.  Currently, she is a dynamic member at the Polish Church St. Stanislaw Kostka,  a teacher at St. John Paul II Polish School and a member of the Pulaski Day Parade Committee of Staten Island.

She is  a scout leader for the Polish Scouting Organization (Hufiec Podhale) and a scouting guardian of the Polish Scouts group called “ Krokusy”, here on Staten Island.  She also participated for several years, at the Annual Polish Festival in Snag Harbor that is organized by St. Stanislaw Kostka Church.

The Polish community has been very dear to her heart and because of that reason she has a passion for being involved in Polish organizations. She is proud  to serve as the 2018 Marshal representing Polonia from Staten Island, New York.

Confirm
Are you sure that you want to complete this action?
Cancel
OK